In Tribute to Jim Dwyer 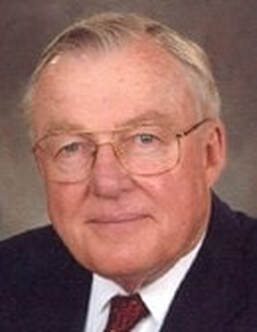 ​March 30, 2020
IN TRIBUTE TO JAMES F. DWYER
By John P. Curtin, Mayor of the Village of Marcellus

On May 23, 1966, Mayor Lester Norris appointed Jim Dwyer as Village Attorney, at a salary of $250 per year. Since 1966, while Mayors and Trustees in the Village came and went, Jim remained – a constant guiding figure for those whose tenure was usually brief by comparison.
In September 2010, after 44 years on the job, Jim Dwyer said farewell to the Village of Marcellus, the longest serving Village Attorney in the history of New York State and the longest serving public official in the history of the Village of Marcellus, surpassing even the 30 years that Lester Norris served as Mayor and J. Fred Woodbridge who was Village Treasurer for 40 years. Our community had been served so long by him that it seemed almost impossible to be able to replace him. Yet, as Jim would tell you himself, no one is irreplaceable.
Jim loved the Village of Marcellus and the Village thrived because of his efforts. As Village Attorney, Jim Dwyer has been part of virtually everything that defined our Village for the previous 40 years, including the Village Code, the Marcellus Fire Station, the Village Planning Board and Zoning Board of Appeals, Village annexations, senior housing complexes, the Waste Water Treatment Plant, the Village Reservoir, the organization of the Police Department and Ambulance Service, the Village Comprehensive Plan, street reconstruction and refuse collection. The list is virtually endless.
Not only was Jim a person who made such a long-time commitment to the Village, he was, personally, one of the finest gentlemen I have ever known. Rarely, if ever, had Jim been known to raise his voice or express great displeasure at any thing or any one. He was thoughtful, considerate, and thorough. His wife and children loved him and he was greatly respected by his contemporaries and fellow attorneys.
As Jim left the service of the Village, he was presented with several gifts, including a framed print of one of the welcome banners that still grace our Village streets. It was most appropriate that this be presented to Jim, representing as it does, not only the history of Marcellus, of which Jim was so long a part, but also the friendly greeting that Jim always presented to all he met.
Jim Dwyer died on March 25, 2020 at his New Jersey residence, a place he settled after his retirement from the Village, and near to his children and his much-loved wife, Ellen, who predeceased him in August 2019. Jim will however return to his beloved Marcellus, to be buried on the hill overlooking the community he served for so long and so faithfully. The contributions of Jim Dwyer to our community, both as a public servant and as a person, should not go unrecognized. The Board of Trustees of the Village of Marcellus commends Jim Dwyer for the tireless service he extended to his community and on behalf of its grateful citizens, offers its sympathy to the family of Jim Dwyer in its time of great sorrow.